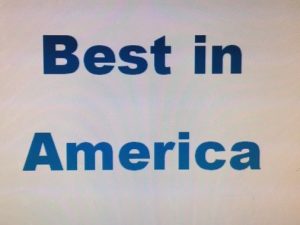 The national media is having a love affair with Birmingham.

Birmingham is having so much positive press lately–it’s almost become boring.

But then 24/7 Wall Street dropped a bomb on us.

As you probably saw on al.com, 24/7 Wall Street ranked Birmingham the 2nd worst place to live in America–behind Detroit.

24/7 Wall Street appears to be a website that arbitrarily selects variables, adds them up, and then ranks cities top to bottom—in an effort to drive traffic to sell advertising.

This seedy business plan may be a good for 24/7, but it’s an unfair disaster for Birmingham.

Not because Birmingham’s an inferior city, but because the rankings are pure nonsense.

Birmingham is one of 35 municipalities in Jefferson County and is ranked without our upscale suburbs.

Cities like Nashville, Louisville, and Jacksonville have county/city governments—so their entire counties are ranked against primarily urban Birmingham.

I clicked on the 24/7 Wall Street Website and searched ‘Birmingham.’

This is what I found:

What difference does it make?

It’s not just 24/7 Wall Street that compares mostly urban Birmingham with broader based cities–so do many other organizations.

Try Googling ‘Birmingham’ with different descriptive words and you will find we are likely dumber, poorer, and fatter than most every other city in America.

Companies and people research ‘Birmingham’ via Google to evaluate where they may relocate.

When you and I travel out of state and people ask where we’re from, we say ‘Birmingham’—because no one has heard of our suburb.

Although many of us may live in upscale neighborhoods with good schools and low crime, we’re judged because our Birmingham region is evaluated unfairly.

Birmingham is not perfect

I’m not saying Birmingham is the Garden of Eden, but most urban cities in America have neighborhoods that are terrible places to live. However, the urban areas in other cities are being averaged into the total population.

Birmingham may be the best city in America

Who are you going to believe?

There are more important variables such as ‘community‘ and ‘generosity‘ that would rank Birmingham the #1 best city to live in America.

Let’s turn Birmingham around.  Click here to sign up for our newsletter. There’s power in numbers. (Opt out at any time)

Invite David to speak to your group about a better Birmingham. dsher@amsher.com