ComebackTown is published by David Sher to begin a discussion on a better Birmingham.

Last month was bittersweet for me.  First, the bitter: I had to destroy something I created.

For the last three months, I had supervised an interactive, community art project downtown.  It was a 60 foot blackboard wall on the side of a building across the street from Regions Field, with 135 spaces stenciled in white with the prompt “Before I die I want to…”  Any passerby was invited to pick up a piece of chalk and share their hopes and aspirations with the community. 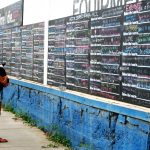 The project was inspired by a 2012 TED Talk by Candy Chang, the New Orleans artist who created the first wall.  It’s now been repeated over 300 times in cities around the world.  Montgomery is the only other city in Alabama that has participated in this global project, so I thought it was time to bring it to Birmingham.  I figured it would get a warm reception, but wasn’t exactly sure what to expect.

Within the wall’s first twelve hours of life, all 135 spaces were filled.  It took less than a week for every inch of free space to be completely filled.  In the thirteen weeks it was alive, we completely erased the wall four times, in addition to all the times a rain shower did the job for us.  Every time, it filled right back up.

The Before I Die wall has given thousands of people in Birmingham the chance to share their dreams with others.  In a city with a history of differences, it was inspiring to see that there were many common themes.  I wanted to share some of those thoughts and what I think they represent about our community.

We care about others deeply, especially our future generations:

“Before I die I want to be a foster parent.”

“Before I die I want to make sure my husband won’t be alone.”

“Before I die I want to help children become better men.”

We want to make our community better:

“Before I die I want to make a difference.”

“Before I die I want to see Birmingham bike-friendly.”

“Before I die I want to make Birmingham even greater.”

We aspire to continue progressive change:

“Before I die I want to end racism.”

“Before I die I want to see gay marriage legalized in Alabama.”

“Before I die I want to vote for a female president.”

We don’t take ourselves too seriously:

“Before I die I want to break a donut eating record.”

“Before I die I want to LOL like I’ve never LOL’d before.”

The security of anonymity allowed many people to comfortably open up:

“Before I die I want to reunite with my children.”

“Before I die I want to reconcile with God.”

“Before I die I want to fall in love for the first time because I’m 40 and no man has ever wanted me.”

Others chose to declare their thoughts and sign their names, initials, and even Twitter handles.  One young man even shared his excitement to marry his fiancée, and two months later returned to take their wedding photos next to the wall.

The original idea was to put it up for only a few weeks, just in time for the end of the Barons’ season.  Because it received such positive reception, the landlord of the building let it stay up for a couple extra months.  But our lease ran out, as it’s time for the building to undergo renovations.

Many people have expressed regret that we had to take the wall down.  I understand and share their sadness.  It’s been such a moving activity to be a part of for the last three months.  Despite my sadness, however, I’m happy we ended this project.

I choose not to dwell on the bitter, but to think of the sweet: the life cycle of this building is symbolic.  The Wood Wade building is about to enter its next phase of life.  Since being built in 1932, the space has housed a lumber mill, automobile dealer, and HVAC distributor.  It’s now set to become our newest craft brewery in Birmingham when Beer Engineers opens next spring.  This is exactly what we should want to happen with our downtown spaces.

If revitalization of our city’s old spaces like this helps move our city towards fulfilling its potential, I’m glad to end this project in the name of progress.

One art project, however, isn’t going to get us there.  It’s going to take all of us chipping in.  Before you die, what do you want to do?  Now, here’s the hard part: go make it happen.

Matthew Hamilton is a West Point and MIT graduate and served as a Captain in the U.S. Army before moving to Birmingham.  He’s the volunteer Co-Organizer of TEDxBirmingham, helping to “Rediscover the Magic” on March 1.

David Sher is the publisher of ComebackTown, a co-founder of Buzz12 Advertising and co-CEO of AmSher Collection Agency.  He’s past Chairman of the Birmingham Regional Chamber of Commerce (BBA), Operation New Birmingham (REV Birmingham)), and the City Action Partnership (CAP).